Posted on December 3, 2017 by WhimsicalWerecat

When it comes to dragons, size is completely subjective to the whims of their origin; whether that be cultural folklore, standard mythology, or the imaginations of the writers and illustrators who bring them to life.

Dragons! And (we) the mere mortals who are insatiably fascinated by these amazing mythical creatures, and perfectly happy to keep on indulging in the tales, games, and movies that shine them in the spotlight.

Having a shared love and curiosity for these scaly wonders, I decided a few years ago to do up my first Dragon Size Comparison Chart. After seeing its popularity with many of you web-wanders and fellow dragon-lovers, and receiving multiple requests for certain dragon sizes, I opted to do a Second Chart.

And the dragon requests kept coming in!

And so, after finishing the draft of my forth novel this year, I set aside some time to research, measure, sketch and silhouette another set of dragons for you to enjoy!

This time around, I have done up charts for twelve dragons, and how I came about estimating their sizes. AND I have also included right at the end of the post a super large chart containing ALL the dragons from the 3 charts (which also includes Deathwing in both his smaller, and ultimate, sizes).

Coming in first, is Twilight Sparkle’s best little bud, Spike. Helpful and playful, even if a bit sarcastic and mean-spirited (on occasion), Spike a fan favourite in the remake Pony franchise; and why would he not be? He’s just so cute!
Spike was reasonably easy to size, because they are plenty of shots with him standing next to his pony friends. For the stickler, the trouble comes in the form of determining the exact size of the Ponies. I checked out a few forums … and couldn’t believe the amount of arguing going back and forth about the the exact height of the Ponies. In the end, I went with Twilight averaging in at 3″2′, making Spike roughly 2″0′ (or 2″6′ if you including his head cone).

I don’t know everyone’s opinion on the remake of Pete’s Dragon, by I personally thought it was wonderful. And I loved Elliot! Like a giant, furry, canine-hybrid, Elliot’s new look, as well as his personality (loyal, friendly, fiercely protective, and intelligent) have surely won the hearts of many dragon-lovers the world over. He has certainly won mine. And he was easy to size, too. I used the below reference picture for inspiration (taking into account Pete’s smaller eleven-year-old size).

Having missed out on a place in the first two charts (by a small margin), I couldn’t deny Dragon a spot in this chart. Both fierce and adoring, Dragon plays a major role in the Shrek series, both as an antagonist, a love interest, a mount, and a supporting character (gosh, Dragon is a bit of a Jack-of-all-trades, isn’t she!). I was surprised by her size when I worked it out (taking into account Shrek is between 7-8 feet tall, compared to my human silhouette of 6″3′). She looks quite large, but I think that has to do more with her rotund ‘fruity’ shape, than actual bulk and bone. Still, you wouldn’t want her to sit on you!

Having done Drogon at his size in Season 4, I received a request to upgrade him to his most current size (as he appears in Season 7). So, I happily obliged! He may not be the biggest dragon in this chart series, but he is one of the fiercest-looking, and quite fearsome all-round if you ask me. An awesome and terrifying creature, indeed. I used the reference screen shot of Drogon’s head next to Jon Snow, to help me work out the dragons’ size. Thanks Jon!

The planeswalker Nicol Bolas is the most powerful of the five Elder Dragons to have survived the Dragon War, and is considered one of the most powerful planewalkers of the MTG multiverse; which, of course, MTG fans would already be aware. But I haven’t played MTG, so I had to go to wiki for help with information, and google for reference pictures.
Now, in the MTG worlds, it’s clear that size is no reflection of power. Nicol Bolas is not what you would call a significantly ‘large’ dragon; in fact, his physique is deceptively slender and agile. But obviously, you’d be a fool to underestimate him. He is irrefutably one of the baddest Big Bads in Magic, The Gathering. Adventurers, you have been warned …

Ah, good ol’ Dragon Ball. A part of my childhood was spent enthralled with Dragon Ball Z alongside my younger brother; fun times, and good memories. I also saw some of GT, but Z was my favourite. And of course, the creature that plays a pivotal role in all the series is the dragon that can grant your wish if your gather all seven Dragon Balls: Shenron the Eternal Dragon.
Shenron was hard to size; the reason being the inconsistency of his size during different summonings (I think the difference lies in the length of his tail; it appears to keep growing out of the Dragon Balls for the duration of his summoning).
In the end, I just had to pick a size that was reasonable as far as being able to fit on the standard dragon size chart compilation. So, while the head and body of my Shenron silhouette is roughly accurate, the tail is not; in reality it would be several times the given length.

Igneel, the ‘Fire Dragon King’, and foster father to one of the main protagonists of the series: Natsu Dragneel. Igneel is described as fatherly and protective, but also brash, fiery-tempered and arrogant. I’ve started watching the Fairy Tail series, but haven’t gotten to the episode where Igneel makes an appearance. Nevertheless, I know he is a catalyst for important plot arcs in the series, so I felt he deserved a place in my Dragon Size Chart collection. One of the reference pictures I used was this (taking into account that Natsu in this shot is just a child):

Tiamat is a supremely powerful 5-headed dragonic goddess from the Dungeons & Dragons role-playing game; also named one of the greatest villains in D&D history. Whew! I guess she ranks up there with Nicol Bolas for a gold title of Big Bad. The difference being, Tiamat is much larger in size by comparison!
Tiamat was a bit tricky to estimate in size; though google had plenty of fan and concept art, very few had human-sized figures in good ratio (the Neverwinter Online shots I found were not very useful). The best reference picture I used to help me was this one: 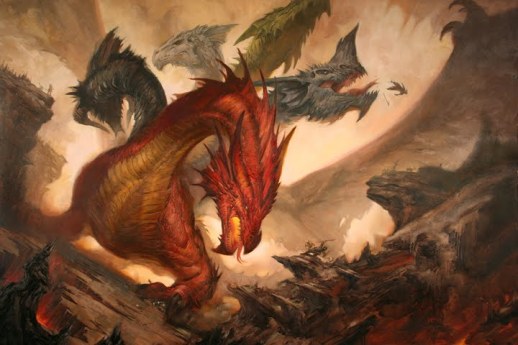 I could go on and on (and on) about how much I love Breath of the Wild. The same feeling of awe and wonder I got as a child playing LoZ: Ocarina of Time for the first time (a feeling I never thought I’d be able to feel again), returned to me in flood-like proportions during my play-through of this game. So, naturally, I had to add one of the three Spring Guardians to my latest Dragon Chart. I chose Naydra, the guardian of the Spring of Wisdom.
There were plenty of references pictures for this dragon. Heck, I could just as easily turn the game on in my lounge-room and find the dragon myself. But it actually turned out to be quite difficult to estimate. For one, the dragons are really long, and really big … and you can’t get too close to them or you’ll be zapped/ burned/ frozen by their awesomeness. Plus, Link (the protagonist), is actually quite a short, wiry little hylian, so I had to take into account his smaller stature, too.
These are the reference pictures I used (the Wisdom Shrine with Naydra in view, and the Wisdom Shrine with Link in view, and of course a good long-distance shot). 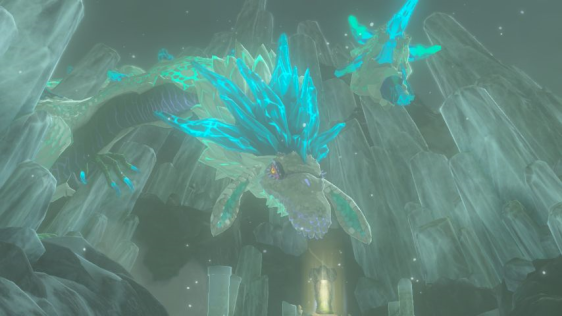 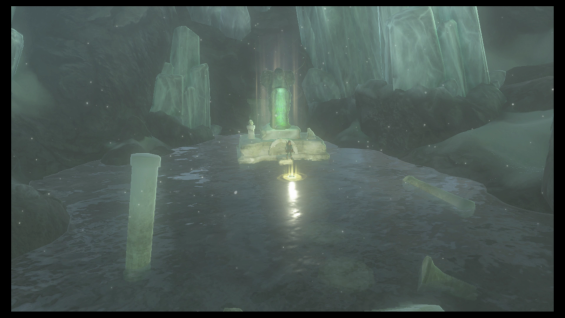 Yeah … these dragons are LOOOOOONG!!!

Time to step into the big leagues. King Ghidorah is one of the ultimate city-destroying monsters of fiction. His original origin story pinned him as an extra terrestrial, planet-killing dragon (yikes!), and 2019 will see the silver screen shine fire and gold as Ghidorah takes on Godzilla in the next Legendary Pictures MonsterVerse installment: Godzilla: King of the Monsters. I, for one, am really looking forward to it!
This is the reference picture I used to help me, although I also took into account the size of the newest Godzilla design (slightly larger than the Godzilla shown), and estimated Ghidorah as being slighter larger, too.

Eminroth is one of the four creatures guarding the energy-stabilizing towers called the Beacon Thrones. Though he is not technically a dragon (he is a serpentine drake), I wanted to add him to the chart because of his awesome size … and his general awesomeness. Eminroth makes his entrance in Book 3 of the series, and what an entrance it is! He is caught in a sand hurricane, but his body is so huge it creates its own vortexes; a storm within a storm.

* Reference pic? Don’t need one. This beauty is of my own creation. I know exactly how big he is! Can you see the speck next to his front claws? Yep … that’s a person.

Also known as Ancalagon the Black … there is no contest, Ancalagon is the biggest dragon in fiction history! He is so large that his creator, J. R. R. Tolkien, never specified his size, other than being so colossal that when he was felled his body destroyed the towers of Thangorodrim (which were described in the book as three smoking peaks of the mountain). So yeah. He destroyed a substantial part of a mountain range.
He is/ was a great dragon of Middle-Earth, a fire-drake, the same as Smaug … but poor ol’ Smaug is a worm by comparison. And since Smaug was already quite large compared to a man … well, you just might be able to spot the human silhouette in the chart if you look really hard. I used the reference picture below to help me establish a size that would qualify as truly ‘colossal’.

Full Chart Part Two (because they were TOO BIG to fit into the other one, and even then, Ancalagon still doesn’t fit):

Ultimate Chart (charts 1, 2&3 – so everyone can fit, including Ancalagon!):

And there you have it! I hope you enjoyed the next installment of my dragon size project! But to be sure, there are many more dragons out there! Who are some of your favourites? Which dragons would you like to see in future charts?