Posted on October 29, 2014 by WhimsicalWerecat

When it comes to dragons, size is completely subjective to the whims of their origin; whether that be cultural folklore, standard mythology, or the imaginations of the writers and illustrators who bring them to life.

So, because I’ve always been curious, and I’m sure others have too, I’ve gone ahead and created a few size charts of some well-known dragons (as well as a couple of my own).

Choosing a standard height of 6″ 3′ for an adult man (which is the average height of the human-like hemlans in my fantasy series), here are the charts of eleven dragons, and how I came about estimating their sizes.

*Take note of the word estimate, because that’s exactly what this is. I know I’m not spot on, but at least these pictures will give you a rough idea of the different sizes of these well-known and well-loved dragons.

Okay, this one isn’t really meant to be serious. But I couldn’t help myself. My fat, cushion-loving mascot is, when all is said and done, a dragon. And estimating his size was easy because he’s currently sitting in my lounge-room.

Mushu was relatively easy, seeing as he is seen throughout the movie, in close proximity to Mulan. But I made sure to take into account Mulan’s smaller stature, and created Mushu’s size chart silhouette accordingly. I used this as a reference picture:

Spyro was a little more tricky to figure out. There are several Spyro games, and the stories take place over an extended period of time. I haven’t played all the games and so do not know the exact time-line progression, or how old Spyro is at the start of each of his adventures, but luckily his age is not an important factor. I decided to choose Spyro from The Legend of Spyro games (the games I’ve actually played), the most recent Spyro story-line (excluding Skylanders), and worked out his height using this picture (placing Hunter at the approximate height of 6″2″):

Laeka’Draeon was pretty easy, seeing as he is my beloved protagonist. I just had to make sure his height was accurate in comparison to the standard height of the adult unicorns in my story, because his and Ubi’s (his unicorn companion) shoulder height are close. And in his silhouette his is crouching slightly, so I had to take that into account.

Haku was a bit of a challenge, but nothing I couldn’t overcome with a little research. Again, what makes it helpful is his close contact with the people in the movie (namely the young protagonist, Chihiro). But Chihiro is a 10 year old girl, which obviously makes her smaller in stature than my standardized human silhouette. So, I researched the average height for a 10 year old girl, and measured her height beside Haku in accordance with the reference picture (see below). From there, it was simply a matter of replacing Chihiro’s height measurement with the taller height of my human silhouette. Ta-da!

Okay, so for those who’ve played the Dragon Age games, you know that Flemmeth isn’t actually a dragon. She is the famous Witch of the Wilds who has the power to shape-shift into a dragon. But what a dragon it is! A large, sleek creature with incredible power and a flame hot enough to melt Dark Spawn armour! I used this image (plus a couple of others at different angles) to help establish her size in dragon form:

Dragon Number Seven: Toothless (How to Train Your Dragon, movies)

There was no way I was not going to add Toothless to the list! One of my all-time favourite dragons, he is both feisty and adorable. Toothless was easy to estimate in size. There are plenty of reference pictures out there, with Toothless standing next to Hiccup, so all I did was work out the average of Hiccup’s size (according to his age in the first movie), and then re-size my human silhouette accordingly. Here is the one of the reference pictures I used:

Fierce and terrible, Alduin was a must-have for my chart. I’ve played the Skyrim game, and fought Alduin, and yet despite my direct encounters and experience, I was surprised when I worked out Alduin’s size. He’s actually smaller than I thought he would be. A good thing for Skyrim’s residents, I suppose, seeing as he is terrifying and destructive enough as it is. This is the reference picture I used:

Draco is an awesome dragon, and a wonderful character, too. It broke my heart when he sacrificed his life, but I guess that only added to his enduring spirit, even after all these years. As I was googling images from the movie, I came across one that was perfect as a reference to work out his height. He’s a good size for a European dragon. Reference picture:

Dragon Number Ten: Faclor (From the movie, The Neverending Story)

A child-hood favourite of mine, there was no question about his addition to the size chart. Falcor’s unusual shape, and a limited amount of reference pictures, it took a while to figure out his exact size (well as close as I could manage). I estimated Atreyu’s height (in accordance with his age), and with the help of the reference picture (below), was able to work out roughly how big our beloved Luck Dragon is. 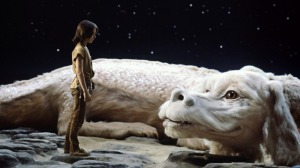 Dragon Number Eleven: Smaug (From the movie, The Desolation of Smaug)

Smaug was probably one of the most difficult, simply because the more I researched, the more I came to realise just how enormous he is! He could eat all the other dragons on my chart for lunch, and will likely still be hungry afterwards. I looked at numerous screen shots from the movie, as well as the below picture as a reference. According to those who worked on Smaug’s design for The Hobbit movies, Smaug is twice the size of a 747. YIKES! 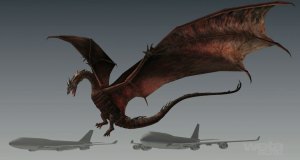 So there you have it. The individual size charts of eleven awesome dragons. But let’s not forget my original intent! Just how big are these dragons, in comparison to one another? Well the chart below will show you!

I hope you enjoyed my little project! I found it fascinating, and altogether quite fulfilling. But there are so many more dragons out there! Who are some of your favourites? Which dragons would you have liked to be on the chart?