A Fa’Luffy Review: Ni No Kuni – Wrath of the White Witch

Posted on December 9, 2013 by WhimsicalWerecat

YOU KNOW IT’S COMING! With his cushion-cravings abated, the big, red, fluffy dragon is ready to dish out his next Fa’Luffy Review! 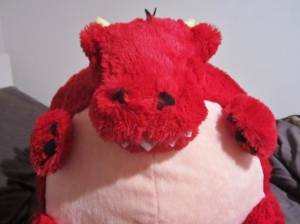 This time around, Fa’Luffy had a few items lined up for review, but had a little trouble deciding which to choose. I made it easy for him by informing him this review needed to be of a game, lest he ruin his (unnecessary) order of entertainment mediums (Game, Movie, Book – in that apparent order).

So, without further ado, it’s time to reveal Fa’Luffy’s chosen review item: A unique and masterfully created Role-Playing game from the reputable game developer Level-5, and the legendary Studio Ghibli.

Today, Fa’Lufy will review: Ni No Kuni – Wrath of the White Witch 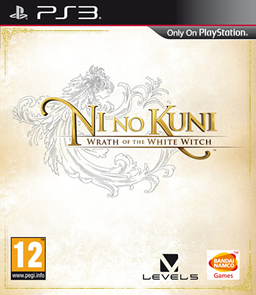 Rated: PG for Parental Guidance/ E for Everyone

Fa’Luffy: A young boy named Oliver journeys to a beautiful and dangerous parallel world in an attempt to save his mother (this description does not do the game justice at all). 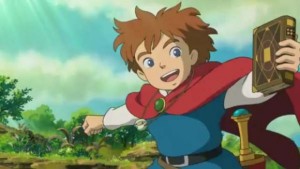 Oliver our brave and loveable Protagonist

Q: Who would enjoy this?

Q: What are some of your favourite aspects?

Fa’Luffy: The in-game graphics look like brightly-coloured and beautifully detailed scenes, straight out of an animation. The characters are unique and loveable (like plushie cushions). The music was crafted by Joe Hisaishi and performed by the Tokyo Philharmonic Orchestra (need I say more). You help people who are ‘heart-broken’, by restoring pieces of their heart (courage, kindness, belief, curiosity etc) You can capture nearly every monster in the game, and use them to fight on your behalf. The story has Studio Ghibli smothered all over it (like the cushiest of cushions) – INCLUDING animated cut-scenes done in Ghibli’s well-loved style.

Just look at these beautiful graphics!

Q: What are some of your less favourite aspects?

Fa’Luffy: The usual ‘level grinding’ a gamer needs to do in an RPG – although it’s nowhere near as bad in Ni No Kuni, as it is in other games. It can be difficult to find and capture certain creatures (usually because certain kinds don’t spawn often enough). Everything else about the game is gold!

Q: How would you sum up your opinion?

Fa’Luffy: Eye-dazzling and heart-warming with a story that will enchant, music that will inspire, and a style of gameplay that perfects the traditions of JRPGs. My gaming compadre bought her PS3 for this game – it’s that good!

Oliver and his friends

Q: What is the final Fa’Luffy Verdict?

Q: So the Fa’Luffy stamp for Ni No Kuni: Wrath of the White Witch is …?

And there you have it, people! The Fa’Luffy has spoken – Ni No Kuni: Wrath of the White Witch is Approved! So if you have a PS3, this game is a must-own for RPG fans. Fa’Luffy has placed it in his top 3 games of 2013.

Have you played a game, watched a movie, or read a book that you think Fa’Luffy would enjoy reviewing? If so, feel free to send through your suggestions. If the Fa’Luffy finds it interesting, the Fa’Luffy will put up a review!