Posted on January 22, 2015 by WhimsicalWerecat

For those who have been checking out each of the Prologue Comics as I’ve added them to the site, I am happy to announce that the NEXT comic is now available! 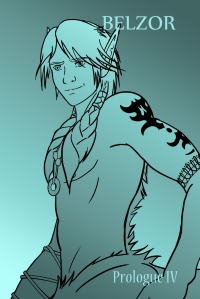 For those not yet in the know, the Prologue Comics have been a side project of mine which I have been working on over the past ten or so months. The comics are a fun addition to the world-building of my Dragon Calling series, and they give bonus insight into some of the characters our protagonist, Laeka’Draeon, encounters on his journey.

As you might expect, the comics are intended to be viewed after one has read KIN SEEKER (the first book in the series), as the comics reveal minor spoilers to character encounters and elements of certain events.

This last comic in particular holds some major spoilers, so I would strongly recommend reading/ viewing only to those who’ve read the novel. But of course, if you really don’t mind things being given away, you are more than welcome to read all the comics (this last one included). I make the comics available for free because free stuff is awesome! But if you’re enjoying my work, I would appreciate your support when it comes to the books, nonetheless. 😉

So, with the last Prologue Comic up and done, what’s next, you might ask?

Plenty, that’s for sure! The current set of four may complete the comics for KIN SEEKER, but there are still four more books in the series, which means many more Prologue Comics to enjoy! I do, however, have other important projects to work on, so you will likely not see the first comic for Book Two until May/ June.

The next obstacle to tackle is the KIN SEEKER COMPANION GUIDE (which will include the four Prologue Comics). The guide is pretty much what it sounds like: a visual and informational guide to creatures, places, and legends hinted at or briefly touched on in KIN SEEKER. There will be plenty of pictures and interesting facts, so it’ll definitely be worth adding to your collection, once it’s released!

I will also be working on the next set of poster and bookmark designs (themed around Book Two of the series, THE BEACON THRONES).

And, of course, I will be working on the next installment of the series. It’s too early to put out an estimated release date for Book Three, but I will work hard to see it released by the end of the year. If that doesn’t come about, it will likely be early 2016.

I feel to remind you how paramount your support is, and how much I appreciate my readers. You wonderful, adventurous people are the reason I do what I do, and I am so happy to share my worlds and creations with you.

Thank you for coming along on this journey with me. It’s been pretty fantastic so far, and we’re only getting started! Continue being awesome, fellow Dragon-seekers! 2015 looks set for some amazing adventures!