Posted on March 18, 2015 by WhimsicalWerecat

Let’s have a little fun, shall we?

As the title suggests, this is a Top Ten list of nightmare-inducing things from movies that sit with a rather deceptive charm in the category for ‘children-friendly’. Okay, maybe that’s a little dramatized … or is it? Truth be told, most of the things in this list never actually gave me nightmares (some did though, when I was a child). But as you scroll down and take in the views of unnatural things created to disturb the souls of viewers, you can’t argue that nightmares have most certainly been born after encounters with these frighting creations.

NOTE: This is my own personal list, and is restricted to films I have personally watched, and are rated PG and under.

Cleverly designed? Yes. Imaginative? Sure! Chances of inducing nightmares in young children? Undoubtedly. The idea of a bunch of bodiless hands growing from walls and speaking to you is not something I’d associate with the nice and the cheerful. Especially if they’re infesting a traumatic place like the Goblin King’s Labyrinth. If this was real, I doubt many people would be as brave as Sarah.

NUMBER 9: CLOWN WITH THE TEAR-AWAY FACE (A Nightmare Before Christmas)

I missed seeing this movie as a child, which was probably a good thing because the clown would have haunted my dreams. Because he’s a Halloween clown, with sharp teeth, and a face that he can just tear right off … *shudders*

NUMBER 8: THE GMORK (The Neverending Story)

LOVED this movie as a child. My siblings and I watched it over and over again (driving our parents nuts, undoubtedly). But The Gmork was definitely scary for me as a kid. Even as an adult (and fantasy writer), I can appreciate the quality of the monster’s power of terror and viciousness. The Gmork has a classic frightfulness about him.

Okay, so AVATAR: The Last Airbender is actually a series and not a feature film, but I had to slip it in because there was one creature that made every one of my Nightmare Fuel senses tingle. Koh is a giant sadistic centipede-like spirit … who steals people’s faces the instant they express any visible emotion. So, you’re safe as long as you remain completely expressionless. As easy as being told not to blink and then having a cloud of dust blown in your face. I applaud you, Aang. You showed up Koh brilliantly.

NUMBER 6: NO FACE (Spirited Away)

No Face is a fascinating character. Entirely creepy, but somehow endearing, especially in the latter part of the film. But creepy comes first. And then repulsive and full-blown nightmare-inducing when he transforms under the corruptive influences of the Bath House. Sweet mercies, I’d be leaving scorch-marks on the floor trying to run away from THAT!

I watched this movie many times as a child and I don’t remember ever having nightmares from it. But I was definitely freaked out by more than a few things, the trolls being the worst. It’s because they look like deranged chimps, and can climb vertical walls like spiders … and they sound like ground nightmares sprinkled with the herbs of repulsion. I echo Willow’s sentiment: “I hate trolls.” 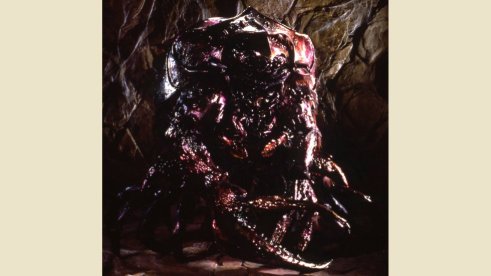 The Dark Crystal is rife with the incredible and the frightening. The story has an unmistakably dark feel about it, and is not for young viewers who prefer rainbows and sunshine. In fact, there is little doubt that half the creatures in the movie have been the cause of a multitude of nightmares over the years. For me, when I was a child, the Garthim were the most frightening. It’s the way they moved … oh gosh, they still give me the creeps (their appearance doesn’t help the matter either).

The head-swapping witch from the not-so-happy-and-even-less-cheerful sequel to The Wizard of Oz. I kid you not, this woman scared the life out of me when I was a child. I had many nightmares about this horrid woman running after me without her head, demanding that I give her mine. Horror is what I felt … sheer horror. And she disturbs me even to this day.

NUMBER 2: THE WHEELERS (Return to Oz) 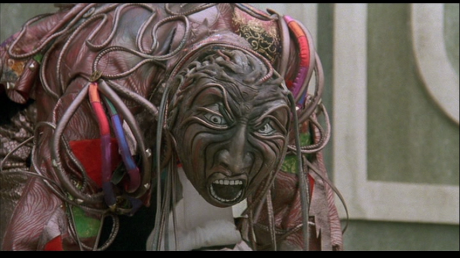 If you’re wanting to have an evening in full of eerie atmosphere and creeptastic characters, then Return to Oz is the film of choice. Once again it produces more Nightmare Fuel than any normal person would care to indulge in. Seriously, they call this a kid’s movie? It’s full of disturbing creatures and frightening encounters; one of the most memorable being Dorothy’s run-in with the Wheelers. Definitely one of the all-time creepiest things you’ll ever see in a kid’s movie! 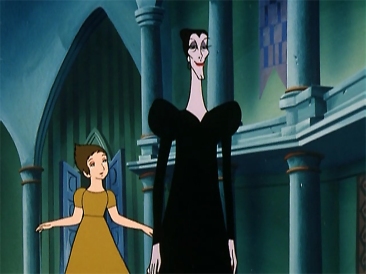 By far the most creepiest, nightmare-inducing character I have ever seen in a children’s movie, is the cannibalistic witch, Madame Hecuba. Oh my gosh, as a child I was terrified of her, and even as an adult, she gives me the chills like no other character has done. The age and the style of the movie play a big role in Hecuba’s essence, as does the music. She is cunning, cruel, and creepy beyond measure. Hence, why she is my number 1 Nightmare Fuel.

So there you have it, my Top 10 Nightmare Fuels found in children’s movies (of all places). So how many of mine would be in your list? What other movie characters/ creatures would you add?